Mistress Serena is a cute mistress and she knows how to use that fact to humiliate loser and have fun at their expense. Today she made this guy think she was into him and she wanted to fuck him but in real sense she wanted to have fun at his expense and she did. She made him lick her feet and suck her toes before he realized she was playing him.

Mistress Antonella took her slave and caged him. She had realized he made food without cleaning his hands. She did not want to get sick out of his carelessness so she punished him to teach him a lesson. She forced him to lick the soles of her shoes as punishment and made sure he was in pain from her trampling before she let him go but with a stern warning.

Mistress Giorgia wanted to go for a vacation she felt she needed but she did not want her slave to mess up. So she punished him and humiliated him so as to make him do all she wanted. She told him she was watching him and even lied about installing cameras all over the house. She humiliated him for what he would do wrong when she would be away before she went away.

Mistress Mnie loves sneakers because they are comfortable. Since she is always wearing them, it therefore follows that she had to use them to humiliate her slave when he messed up. She came home and found him jerking off to her photos in his phone. She was pissed and taught him a lesson so that he could stop his perverted behavior. She crushed his whole body and inflicted a lot of pain to him. 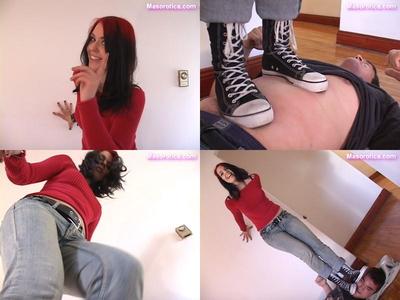 Mistress Roxy was getting ready for work and she realized her shoes were not as clean as they ought to be. She could not go to work like that so she made her slave lick them till they were as clean as she wanted them. She was in a hotel and she asked him to come all the way to the hotel to lick and clean her shoes using her saliva.

Madame Marissa did not like her slave's habit of picking other people's things. To make him stop, she used the part of his body which did the stealing. She settled on his hands and crushed them using her boots. She stomped on them and told him to be careful. Next time he felt like stealing anything from anyone, he would be able to stop himself as the punishment would still be fresh in his mind.

Goddess Candy had never before humiliated or punished a girl slave. Today she had the chance to and she loved it. She had fun making the girl slave lick her feet which were sweaty and smelly. She did not worry about what he would do or not. She humiliated him and dominated him like she had never dominated anyone in her life. She had a lot of fun and made a point to humiliate more female slaves and losers.

Lady Krasaviza came home and found her slave had not done anything she had told him to do. He was taking everything for granted since she had never punished him and she was getting tired of it. She had to punish him and what she did was use her slap fetish to make everything alright. When she was done slapping him, she knew he had learned his lesson and would not take anything for granted again.

When this loser lied to this mistress, she was pissed. She hates being lied to and she had to make sure her slave did not do it ever again. She used a trampling box to punish him but instead of trampling his face, she decided to choke him using her hands. She covered his nose and his mouth and he had to struggle to breath and pleaded with her to let him go.